Let us get this one out of the way, shall we? Yoan Moncada sits atop of the MLB prospect rankings. He is 21 years old, and was signed for $63 million by Boston back in 2015. He was later traded to the south side of Chicago as a piece in the Chris Sale deal. Boston wanted to develop him as a third baseman given Dustin Pedroia is still going to be the guy starting for years later. Given Pedroia's loyalty to Boston, and Boston's loyalty in return, it made sense for Moncada to be moved to a starting pitcher. With the "win now" mentality of Boston's GM, Dave Dombrowski, the move was made prior to the 2017 season. Moncada will be turning 22 years old in a few days, and has an excellent source of power and speed. Through 24 games in Triple-A, Moncada has a .331/.401/.905 slashing line, and 10 SB. He is a switch-hitter, but is a better hitter from the left side, as many switch-hitters are. Moncada has shifted back to second base, which seems to be the long term position for the Cuban international.

Being signed back in 2015 gave Moncada a generous amount of games in Single-A and Double-A ball. Moncada played 81 games with the Boston Single-A team, finishing with a .278/.380/.438 slashing line. He also stole a walloping 49 bases in that span. The next year was split between Single-A and Double-A. He combined for 45 SB in 106 games. He also had over a .400 wOBA at each level. Moncada's strikeout rate did take a rise when going to Double-A (30.9%). That hasn't dropped much in 2017 (27.4%). This is not a knock against him, as many young bats come in with high strikeout rates. We saw Kris Bryant have 27% and 28% strikeout rate seasons in the minors, and in his 2016 season he finished with a 30.6% strikeout rate at the Major League level. Moncada is going to carry a high strikeout rate over the course of the next few years. Moncada has shown a lot of potential earning him the top prospect spot.

Within The Next Few Years

Where do we go from here? The latest reports say Chicago is not close to calling up Moncada. It makes sense, he is still 21 years old, and has a lot of seasoning to be done before entering the MLB level. But what does Chicago have to lose at this point. Sure, they are three games back in the AL Central, but Chicago isn't going anywhere this year, next year, or the year after that. If you took him in drafts this year, I really hope it was at the end of them. It is looking more and more like an August call-up at the earliest, unless injuries take way. Right now Yolmer Sanchez has been thriving at second base, but is not the long term option for the future. They could also trade Todd Frazier during the Summer months, making way for Moncada to get some time in. In 2017, expect a call up within the next few months. He will likely accumulate month of play.

I wouldn't expect him to come out and light the world on fire either, he will be a boom-or-bust threat until he has been an everyday starter over the course of a few months. We have seen Andrew Benintendi keep the starting job in Boston, Ian Happ has jumpstarted a sluggish Chicago offense, and Cody Bellinger is making Hollywood is home. You might not have expected the names of Bellinger and Happ to jump ahead of Moncada to make a difference in the Majors this season, but it was actually more likely than you think. Moncada will have the service time talk going for him throughout the next few years. They can keep him through 2022-2023 depending on his service time. 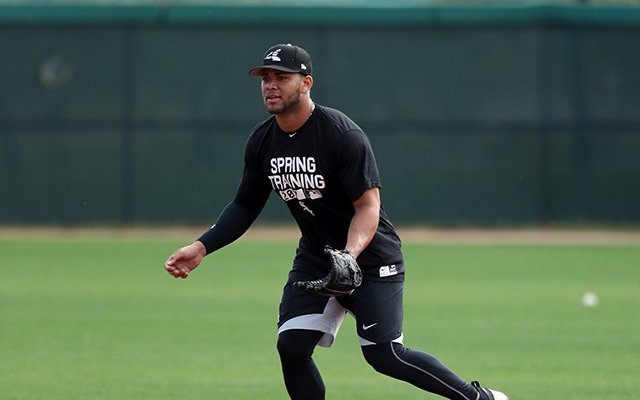 In the long run Moncada has a chance to become a very special player. We have seen Cuban signed free agents take numerous routes at the Major League level. Yasiel Puig was an exciting player back in the 2013 and 2014 seasons, but has dealt with injury and attitude issues over the last few seasons. Puig didn't have the power or speed Moncada has, but brought a jolt of excitement to Los Angeles. Yoenis Cespedes brought the power to the table, and a terrific outfield arm, playing very minimal time in the minor leagues. Jose Abreu did not even see an at-bat in the minors, and hit 36 home runs in his first season. He has had three straight 100+ RBI years, and two of the three seasons hitting 30 or more HR. Abreu and Cespedes came in at a much older age than Moncada, which makes sense for their lack of time in the minors. Puig spent some time in the minors, but tore it up before quickly being called to the majors. Chicago isn't going to rush the process, and I would not even be surprised to see him play some of 2018 in Triple-A. If I was a betting man, I would think he starts on the Opening Day roster come 2018.

Moncada has a promising future -- with the money, trade news, and name value he brings to the fantasy world, we want to know what he brings to the table in terms of projections long term. Are we getting a Robinson Cano type player? Jason Kipnis even? The chances of him falling in those lines present a pretty good ceiling. He very well could show off Cano like power and hit for 25-30 HR a season. Kipnis has a bit more speed to his game stealing 30+ bases back in 2012 and 2013, and Moncada is faster than Kipnis. Moncada could very well be a 20+ HR guy with 30+ SB tied to his name. I wouldn't expect that to continue come within the next few seasons, but lets say at 24 years old he figures it out, we are getting a prime player with elite speed and power. He will also hit half of his games in a favorable ballpark.

There are two sides of a coin, and as optimistic as I want to be, we can take a quick look at the negative. What if he never fixes his strikeout issues? What if he becomes Delmon Young? It's not a crazy question to think about. We have seen numerous top prospects fail to make a consistent MLB career. Don't come at me with a Young-Moncada comparison. Moncada is chiseled out of stone, not like Young who slacked off. Moncada has the looks of a promising career. Chicago has an expensive steak, but still needs to season and cook it properly before fully enjoying.

Now we get to what you want to know. Dynasty Leagues, hang onto Moncada and cherish him unless you get a sweet deal. The ceiling is high, and most of you know that already. Given his name value, I would not be opposed to take an established prospect, or above average players in a haul for him moving forward. If you are in a keeper league, do not bother hanging onto Moncada for next season, nor do not rank him high on your draft boards. It is simple, you were far too ahead of the curve if you drafted him this season. Keep tabs on him moving forward in 2017. The news of the beat writers can be useful, but don't 100% put all your belief into it. If Moncada gets called up at the end of the year and looks to have figured some things out, his stock will only rise ahead of 2018 drafts.